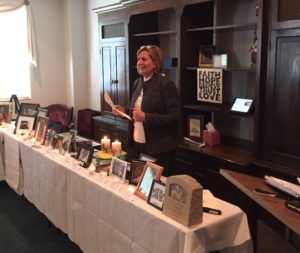 Founder Micky Golden Moore, Ph.D., M.S.H.P.  spent thirty years as an adjunct university instructor and consultant in the area of Communication Studies.  From the United States to the United Kingdom, Micky instructed students in public speaking, speech writing, and interpersonal communication.  As a communication skills consultant, she has worked with a variety of professionals – from automotive plant employees to high ranking executives.  Her enthusiasm for the subject of Speech Communication inspired students to discover that they could indeed transform their communication skills…from the mundane to the memorable.  Micky derived great satisfaction from her work in the field of communication, however, two significant losses altered the direction of her work.

The loss of her father, Louis H. Golden, from cancer and her mother, Sylvia Golden, three years later from cardiac arrest, left her overwhelmed with grief.  Micky was fortunate to be supported by her husband, Bud, but found herself stuck in her grief.  A good Samaritan reached out and encouraged her to explore a unique program offered at Madonna University (Livonia, MI).  This act of kindness changed the direction of Micky’s life and led her to enter a master’s degree program in Hospice and Palliative Studies.

Her initial motivation was to study the subject of bereavement and make meaning of her own losses. With each passing semester, she rediscovered her passion for helping others, though she hadn’t yet determined exactly how she might achieve this objective. During the course of her studies, her two cats of sixteen years, Pablo and Nellie passed away.  Micky and her husband received a memento from the veterinary hospital for which they were very grateful: Pablo and Nellie’s paw prints set in clay. However, beyond these paw prints, they grieved in isolation, as they discovered that this form of loss was often misunderstood or minimized by the greater community.

Unaware of resources or materials that might have validated their losses, Micky began to research the subject of pet loss. With the encouragement of her professors, Micky founded Beyond the Paw Print Pet Loss support group for anyone who has lost, or anticipates the loss, of their animal companion. Initially motivated to find support for her own pet loss grief, she became the one to provide this form of support for others.  With gratitude to the individuals who attended that very first meeting in March 2009, and all those who have attended meetings from that point forward, BTPP has recently celebrated eleven years of serving the pet loss community. But the story doesn’t stop there…

In memory of her dad, who found great comfort from the hospice chaplains who visited with him and the entire family during his final months, Micky had long hoped to pursue a second career in hospital chaplaincy.  After graduation from Madonna University, Micky realized that this pursuit would strengthen her grief support skills – as a more compassionate and caring listener.  She completed five units of Clinical Pastoral Education (CPE) and presently works as a staff Chaplain at a regional human hospital.

and Tony Merlo for taking over management from 2016-Present 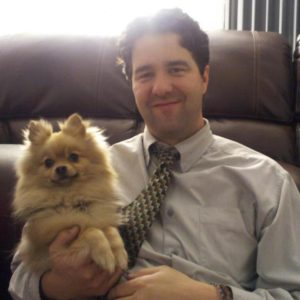